Last week our Chief Operating Officer, Elaine Baines, celebrated her 20th anniversary with City of London Sinfonia. Having joined the executive team back in 1995, she is described by many as ‘the beating heart’ of the orchestra, and definitely the go-to person in the office for any obscure questions!

We asked her to write a blog on her 20 years with CLS of her funniest memories, disasters she knew and most rewarding moments.

When I was interviewed for this job by Richard Hickox back in 1995 he asked how long I thought I would stay. Laughingly I said ‘if I’m still enjoying it as much as I think I will you will probably have to pension me off’. We all laughed but little did I know the Fates were listening and sealing my fate!

20 years on I still love working for this amazing orchestra.  Every season there is a new challenge: music I haven’t heard before, artists I haven’t worked with, old friends to meet again and the joy of watching a disparate group of players sit down with a page of black squiggles in front of them and make magic. I suppose that is the lasting wonder of this job – the moment when everything comes together and the magic is made.

It is very hard to pick out high and low lights from 20 years but I’ve tried:

Lets start with touring – never as glamorous as it sounds and always far harder work then you think.

There was the time we went to Barcelona with Jose Carreras. Part way through the Intermezzo from Cav the city suffered a power cut which lasted for about 4 minutes. The hall was plunged into complete darkness but the orchestra carried on playing without missing a beat. The conductor came off stage looking as though he had just had a heart attack!

And the tour to Germany when I had to move a grand piano by myself and only the principal viola stopped me from pushing it off stage. Four cities in four days and finally we got to Bonn and I sat beside the beautiful Rhein and saw a dredger – ah the romance!

In December 1999 we went to do a concert in the Cathedral of St Jin in Hertogenbosch, Holland. It was so cold the spittle from the oboes was freezing on the carpet and the audience turned up with hot water bottles and fur coats. 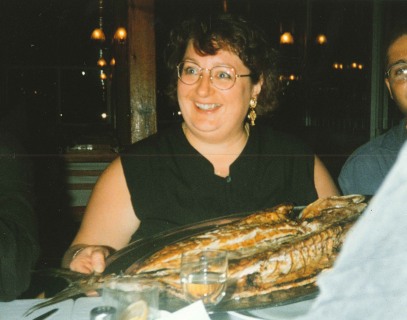 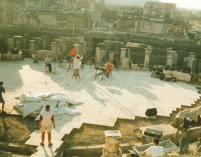 My favourite tour though has to be a trip to Ephesus with Sir John Tavener to play his music for a conference on the revelation of St John and global warming. 6 brass players, 1 percussionist, a famous cellist and two famous singers who shall remain nameless, Sir John Tavener and me! The concert took place in the magnificent amphitheatre but the local wild life took issue with their evening being interrupted. A local dog howled through most of the concert and a bat wouldn’t leave the soprano soloist alone and kept flying around her head and then up the steep sides of the theatre in front of her. Completely oblivious she sang on until a particularly high sustained note stunned the bat flying towards her. It lay quivering on the marble floor for several minutes before crawling away. As the cellist started the next piece a beetle the size of a dinner plate started to crawl towards him. He saw it coming nearer and vainly tried to shoo it away with his foot. Just as I thought he would run screaming from the stage the beetle fell down a gap in the floor. In the meantime I was watching the concert from the top of a flight case trying to avoid the rats milling around at my feet!

My most power-crazed moment has got to be cueing the bells of St Pauls to start ringing and the great west door to be opened during the finale of Tavener’s Fall and Resurrection. 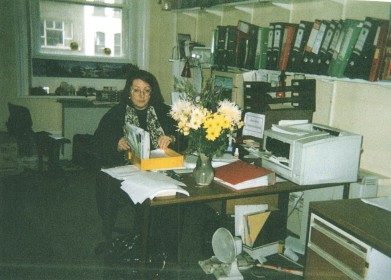 When a player has a particularly good solo passage in a concert, the other members of the orchestra cannot stop and applaud so they make tiny shuffling noises with their feet under their chairs. It can’t be heard off stage but the soloist knows that their fellow musicians appreciate their artistry and it’s a great accolade to get a ‘shuffle’.

During the run of Amadeus in 2003 there were quite a lot of stage moves to be done so the director dressed the Concert Manager and myself in period costume and we had to go on stage as though we were servants moving furniture around.  At one point I had to go on, snuff out an elaborate candelabra and then take it off stage. On the first night I had just lifted it up and Salieri turned to me and started addressing his speech directly to me. I stood there holding an extremely heavy candle stick wondering what to do and when he dismissed me I bobbed a curtsey and hurried off stage. The next night the same thing happened but I was ready for him and as I went off stage I heard the soft but distinct shuffle.  I remain very proud of my shuffle!

Strangest things I’ve had to do

1.  I’ve made a gravestone complete with noose, gun and knife, and a portable sheik’s tent ( attached to a golf brolly)  for a semi-staged performance of Bourgeois Gentilhomme.

2. In 1998 we played for the opening of the newly renovated Victoria Hall in  Stoke on Trent. Ned Sherrin had written a new work about Sir Thomas Beecham and George Baker was to play him and conduct the orchestra in Parry Jerusalem and Elgar ‘Nimrod’ from the Enigma Variations. It became apparent in rehearsals that although George was a superb actor and was an excellent Beecham he had no sense of rhythm AT ALL. After two conducting lessons with Richard Hickox and a 3 hour rehearsal he still could not manage the Elgar. The only solution was for me to sit at the back of the second violins and conduct in reverse with George following my exact movements. We managed to get through both pieces without stopping and George had a very good review but I was accused of being wooden!

Disasters I have known

1. The concert in Ipswich when the piano soloist went missing. Whilst my colleague looked for him I had to go on stage in that complete silence which happens between an orchestra tuning and the conductor appearing and ask the leader to keep tuning. Richard Hickox NEVER let me forget it and periodically used to say it as he went on stage.

2. The Proms concert of Grainger’s music which featured a very rare instrument called a Solovox playing Danny Boy. This was basically a large, one-octave keyboard with old fashioned glass values inside. Like an old TV it took a long time to warm up so once it was switched on it had to stay on. We started the concert and when we got to Danny Boy, the strings played the introduction and then NOTHING happened. A keen health and safety stage manager from the BBC had turned the solovox off as it obviously constituted a fire risk. Richard thankfully turned to the audience and made a joke of it whilst I scrabbled around on the floor of the Albert Hall looking for the plug!

The one memory that makes me laugh every time

Finally the one memory that makes me laugh every time I think of it happened during our tour of Radio Rhapsody. Our principal percussionist Glyn Matthews provided all the sound effects for the recreation of a 1930’s radio show and was in full view of the audience at the front of the stage. At one point Glyn had to imitate the sound of a woman walking up a gang plank. I shall never forget the sight of Glyn hoiking up his concert trousers to reveal he was not only wearing very high stiletto shoes but also fish net tights!