Gabriel Fauré, composer, organist and teacher, was one of the foremost French composers of his generation; his musical style was a monumental influence on many other twentieth-century composers. The headline act of our Fauré Requiem Tour, Fauré’s is the most frequently performed musical setting of the Requiem, and this masterpiece marked the pinnacle of a prolific career. As we approach the second leg of the tour, we take a closer look at the man behind the music. 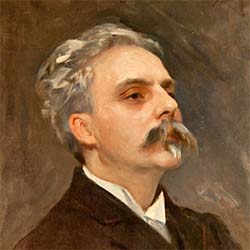 Background: Fauré was born into a cultured, but not especially musical family. When his musical talent became clear, he was sent to Ecole Niedermeye, a music college in Paris, aged only nine. Here he met Camille Saint-Saëns, one of his teachers, who became a lifelong friend. After graduating from the college in 1865, Fauré earned a modest living as a teacher and as an organist, taking over from Saint-Saëns at the Eglise de la Madeleine.

Based in Paris, he integrated into the salon culture, where he was involved in the formation of the Société Nationale de Musique, a movement conceived in reaction to the tendency of French music to favour vocal and operatic music over orchestral music hosting concerts to allow young composers to present their music publicly.

In 1883, Fauré married Marie Frement  and the couple had two sons. His compositions earned him a negligible amount, earning an average of 60 francs a song with no royalties and he struggled to support his family (and mistress, whom he kept in a Paris apartment!). This hardship made him prone to bouts of depression.

Requiem: It was during this period, however, that he embarked on the iconic Requiem. Begun in 1887, it was one of the few works that he did not destroy, but revised and expanded, until it was finalised in 1901. After its first performance in 1888, at the Eglise de la Madeleine, the Priest reportedly told Fauré: “We don’t need these novelties: the Madeleine’s repertoire is quite rich enough.” However, critical reception improved, Saint-Saëns remarking: “Just as Mozart’s is the only Ave verum corpus, this is the only Pie Jesu.”

Breakthrough Moment: Finally, the 1890’s began to bring a change of fortune for Fauré. After initial opposition for being deemed dangerously modern, Fauré was at last offered the position of professor of composition at the Conservatoire de Paris, where his students included Maurice Ravel. By his last years, Fauré was recognised in France as the leading French composer of his day and was eventually made Director at the Conservatoire de Paris. Although he continued to compose, his works of the late years were affected by his hearing loss, which inevitably caused his retirement. In 1922, the President honoured him with an unprecedented public tribute; a national homage.

Fauré died from pneumonia on November 4, 1924, and was laid to rest in the Cemetiere de Passy in Paris.