Skip to content
Date: May 24, 2013Author: City of London Sinfonia

Last Friday, our string quartet were at St Joseph’s Hospice in Hackney to perform in a concert that was the culmination of a musical project with John K Miles and the patients, volunteers and staff at the hospice. This project formed part of Dying Matters week, which aims to change public knowledge, attitudes and behaviours towards dying, death and bereavement. Over the past few weeks, John has been working with City of London Sinfonia and the participants to compose new music that is inspired by their experiences, thoughts and feelings. 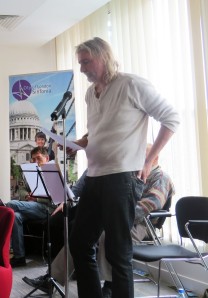 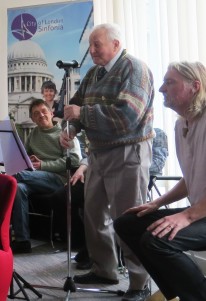 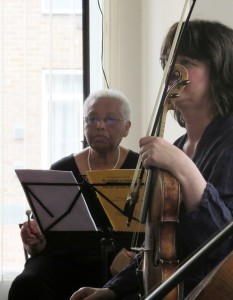 We caught up with John briefly, ahead of the concert in which the group came together to perform their work in front of an audience of friends, family and hospice patients and staff…

Could you tell us a bit about the project and who you are working with?

It’s a project in St Joseph’s Hospice and I’ve worked with a mixture of volunteers who have some connection to the hospice (one of our volunteers is a man named Paul who’s lost his wife and she was a patient here about two or three years ago), people who are outpatients at the hospice and also some of the hospice staff. Every week (including the concert day!) there’s been a new person join in so I feel that the project has really gathered momentum. I know CLS have worked with St Joseph’s Hospice before, having come in to perform concerts, and the idea was to put together a creative project, which we’ve done, and we’ve got some lovely stuff to perform.

The group will be performing poetry with music, we’ve got some songs that we’ve written together and we’re performing a couple of songs, workshop standards, that we’ll all be singing. Most of the material has been written by the group with the City of London Sinfonia quartet interjecting a couple of classics.

That sounds fantastic. How did you approach composing as a group? Could you tell us a little bit about the compositional process?

We more or less wrote songs on the fly – we didn’t have a formal songwriting process. Sometimes we did some brainstorming for words and sometimes the participants came to me with ideas. The group was very responsive, as soon as we had some words and suggestions for melodies we pretty much, straight away, had a basis for our first song  – it’s about the hospice. One of the volunteers is a poet  and he brought in a poem that he’d written, which we set to music and one of the other participants brought in the beginning of a song that she’d written and I added to it. I have added a couple of things to the songs here and there, sometimes harmonies, but the group’s been very responsive and it’s been very much a joint effort.

You have varying levels of abilities within the group. How do you approach working with non-musicians?

Well I find that the participants, non musicians or musicians, often have as good if not better ideas than me! Everybody puts in what they are able to reference and sometimes they are very unexpected things. I think that goes for anybody that I work with. For example, we’ve got a 91 year old participating in today’s concert – he brought in a great song from the 30s or 40s and we’ve made a funky arrangement of it for him to perform with the group. You could say we’ve brought it into… well… maybe to the 70s!

And what are the main things that you’ve enjoyed about this project and working with this group of people?

It’s been a privilege working with these people because they’ve very quickly built up a really good, cohesive feeling in the group and people have shared very personal things. It’s been really fantastic to work with them.

We took the camera along and managed to get some great shots of the group in action (see above). The concert was fantastic success with lots of opportunity for the audience to get involved!

Congratulations to all the patients, volunteers and staff at St Joseph’s Hospice for a fantastic concert.

Happy Friday! We hope you’ll enjoy your weekend as much as this little girl enjoyed our #SoundPlay session. Our #SoundPlay project takes place at Children and Family centres where families join our players to express themselves by engaging with live music in their own way.
We assume you already know that Bach’s music is mathematically perfect.
"It’s not often you come out of a production of Carmen feeling that the murdered heroine will be genuinely mourned."
This week, CLS was delighted to reprise our birdsong walk in Hyde Park for a corporate event.